The legendary Adnan Siddiqui has been one of the busiest actors of the Pakistani media scene, but at the same time, he is also the most gentle and kind celebrity across the country. He has not only won ample hearts with his spectacular acting capabilities but also because he is an epitome of grace and sprinkles his charm on various instances through social media.

The ‘Mom’ actor is not only fond of singing and acting, but he is also a great writer and an exceptional storyteller and his posts are the perfect depiction of the aforementioned fact.

Recently, Shahwar from Meray Paas Tum Ho took to Instagram to write a heartfelt note about how should parents spend time with their kids in the current situation. He wrote, “This is best time we can spend with our kids, how about letting them use their creativity on you and share some pictures?”

This is best time we can spend with our kids, how about letting them use their creativity on you and share some pictures? Here’s Zayd’s depiction of Wolverine (X-Men) on yours truly. ???? Master Zayd, making his debut in direction, styling, hair and photography. Liked his debut? #lockdowntales . . . . . #quarantine #lockdowntales #dailydairy #kids #son #creativity #zaid #adnansiddiqui #wolverine #hughjackman #X-Men

The Lahore Falcons’ captain went on to say his son Zayd made him Wolverine, a famous character from X-Men, asking his Instagram followers whether they liked his son’s debut direction, styling, hair, and photography.

His post instantly received an outpour of love and appreciation for him and his kid. Fellow celebrities like Aijaz Aslam, Frieha Altaf, Ainy Jaffri, Zhalay Sarhadi, amid others were the first ones to sprinkle admiration over the photos. 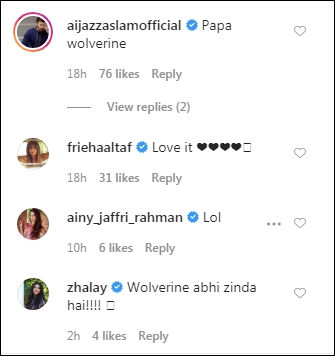 More power to you Adnan! We totally admire you for being one of the most humble celebrities our country has ever produced.