Pakistan’s television is watched by a vast populace today, as it exhibits subtle talent of acting and direction along with commendable storylines. Not only women, our men are also engrossed in different top-of-the-line dramas that are being produced by teams that are utterly devoted to their work.

Likewise, Kashf Foundation, in collaboration with Khoosat Films and Australian Government, under the umbrella of ARY Digital Network, initiated a drama series, ‘Akhri Station’, based on seven episodes.

“Women in all eras have been told to keep their dreams to the eye of a needle.” Said Roshaneh Zafar, the managing director of Kashf Foundation, while acquainting ‘Akhri Station’. She told that the series compromises of seven episodes. It is the story of seven women that belong to seven regions of the country and live seven distinct lives.  The story dwells upon the diversity of women, their sufferings and the plague of injustice which has rotten our society. 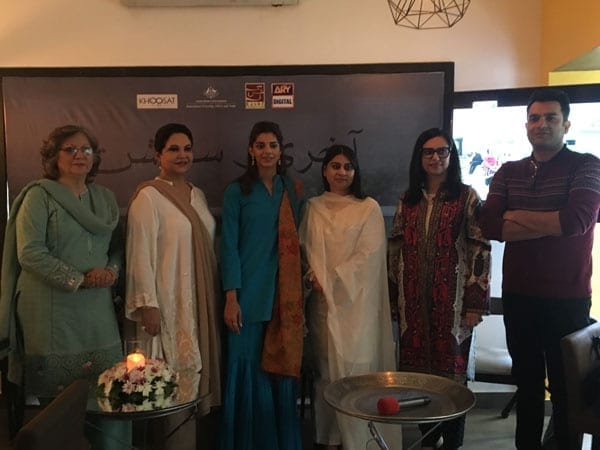 Zafar also told, “Media is responsible for carrying out any kind of change when crafted right. ‘Akhri Station’ is the reality we see around us, but it is not about showing women as victims, it is actually showing women as the heroes of their own stories. We reached out to different women facing severe challenges since we needed this project to be based on real-life stories. The women we met for inspiration, transformed their miserable experiences into providential lives by their willpower and bravery.”

“I was called by Kashf Foundation to meet some of the victims. Their stories turned out to be ‘soul-shaking’. The atrocities they faced were so severe that they cannot be depicted on local television.” Said, the journalist, Amna Mufti, who is also the writer of this story. She also told that these episodes portray the Xerox copy of what she had in her mind while preparing the script.

‘Akhri Station’ is directed by the ‘Manto’ sensation, Sarmad Khoosat. He told that the story was so powerful and moving that he agreed to work without thinking another second. Khoosat said, “I never thought acting will transform so drastically into feeling something. I’ve seen actors pour their utmost skills and passion into the movie.

The reason of this serial is to let the world know that most of the women face difficulties regardless of their ages and their class, but usually, the issues they face go unnoticed. We came up with the conventional-style drama that will deliver the right amount of delectation in comparatively smaller time.”

Sarmad Khoosat urged the people to watch this drama as it has the ability to change perceptions and lives.

The lead protagonist, Sanam Saeed will be seen as a woman facing depression despite having a happy life with an understanding partner (Mikaal Zulfiqar). “I used to ask my mom, why do you cry when you’ve got a great family and everything to smile? We later found out that it was natural and happens due to a chemical imbalance in the brain.

I’ve lost my mom nine months ago and this character will depict my real emotions. Women in dramas are seen bashing each other in one way or another. With ‘Akhri Station’, a strong message of sisterhood has been presented along with messages of communication and support.” Said Saeed who will be playing Tehmina in the serial.

Legendary Amjad Islam Amjad’s poetry became a part of the OST of ‘Akhri Station’ entitled ‘Mujhay Apney Jeenay Ka Haq Chahiyeh’. Veteran actor Tahira Syed sang the title song of this mini-series. Syed told that she had sung other songs for Kashf Foundation as well and she recorded this song while she was in the middle of a project in the United States because it felt important.

Moreover, a special rendition of the poetry is done by Bollywood actor and poet, Shabana Azmi.

Main leads for ‘Akhri Station’ are played by Sanam Saeed, Amara Butt, AnamGohar, Farah Tufail, EmanSuleman, Malika Zafar and NimraBucha with acclaimed actors like IrfanKhoosat and Mikaal Zafar. ‘Akhri Station’ touches upon taboo topics like HIV, drug addiction, forced prostitution and more.  In the story, seven women from various backgrounds end up in the same train. As the journey progresses, they learn more about each other and come to realize that though they seem different at first, they are actually very similar.

“The name ‘Akhri Station’ has been chosen because you get out of the train and progress towards your destination from there. Similarly, all seven women will initiate new, empowered lives from the ‘Akhri Station’.” Said the lead actor, Sanam Saeed.

Based on real-life stories and narratives, ‘Akhri Station’ is all set to air on 13 Feb. at 9 pm on ARY Digital.

Tell us your perception about this mini-serial in the comments below.