Anil Kapoor And Madhuri Dixit Will Work Side By Side

The Hollywood sensation, Anil Kapoor has garnered utmost fame through his exceptional acting in various Bollywood movies. He has the honor of working in Hollywood with Slumdog Millionaire and Mission Impossible: Ghost Protocol. 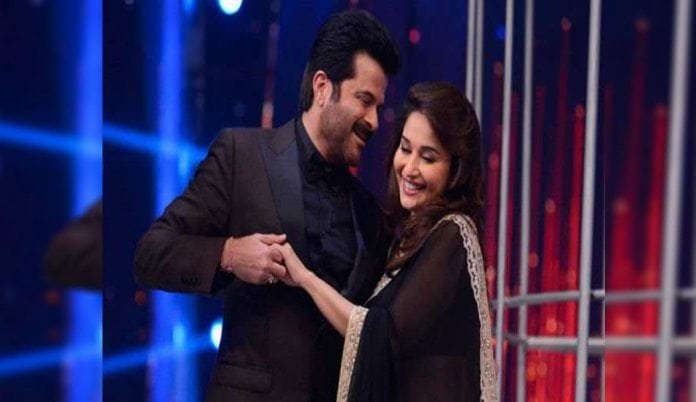 Madhuri Dixit has a long history of performing flawlessly in ample B’ Town films. Along with her extraordinary acting, the starlet has also proved herself as one of the best dancers Bollywood fraternity ever offered. Her ‘Ek Do Teen’ has become one of the extensively admired music videos of all time.

Having started romancing from their starrer ‘Hifazat‘ in 1987, Anil Kapoor and Madhuri Dixit appeared in abundant flicks from ‘Pukar’ and ‘Jeevan Ek Sanghursh‘ to ‘Ram Lakhan‘.

Madhuri disappeared from the silver screen following her wedding in the US. She emerged in the Bollywood with her musical flick, Aja Nachle, which, albeit, failed to impress the spectators. Recently, the veteran protagonist, Anil Kapoor posted a photo on his Instagram with a caption, “How I love the first day of shoot! #TotalDhamaal begins today! @madhuridixitnene #IndraKumar & I are working together after 26 years but the energy and vibe is the same as it was during #Beta! It’s going to be an epic ride! Let’s get the camera rolling!” depicting that the stars are already busy, working on a similar project.

So finally, the iconic and well-celebrated duo, Anil Kapoor and Madhuri Dixit are all set to enthrall in a romantic comedy entitled, Total Dhamaal. While their fans have been anxiously waiting for the movie to come out, the Jhakaas guy has taken the news to his Twitter.

How I love the first day of shoot! #TotalDhamaal begins today! @MadhuriDixit, @Indra_kumar_9 & I are working together after 26 years but the energy and vibe is the same as it was during #Beta! It’s going to be an epic ride! Let’s get the camera rolling! @foxstarhindi @ADFfilms https://t.co/lZBJ3rYJqF

However, the prima donna also exhibited her admiration for her fellow actor and the director Indra Kumar, who also directed Beta.

Can’t stop laughing while working with these 2 crazies even after so many years… it’s #TotalDhamaal ???? https://t.co/8rJLjHpQ7Y

With the addition of these versatile actors, this installment of Dhamaal franchise will not have Sanjay Dutt in it. Furthermore, the movie is all set to release on the 7th of December, 2018 and we are already uber excited for this!