ARY Digital is all set to screen the world television premiere of Janaan, one of the highest grossing films of 2016 on the 22nd of April starringArmeenaRana Khan, Bilal Ashraf, Ali Rehman Khan and Hania Amir in lead  roles along with a string of veteran actors from the indutsry.

One of the drawbacks of Pakistani movies is that we can only watch them on the big screen. Their DVDs are unfortunately, not available. So if we miss the screening of a movie in the cinema we are to wait for its premiere on the television.

The movie set in Swat isa love triangle revolving around a beautiful girl from Canada who returns to her hometown in Swat.

Beautiful landscapes of Swat, fluent narration and an engaging on screen chemistry between the actors makes Janaan a captivating hit coming soon to your television screens. Stay tuned to ARY Digital. 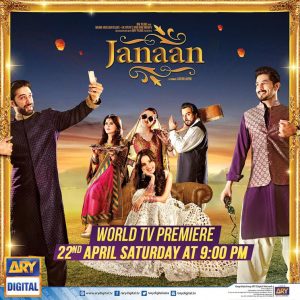