Scrolling down our social media platforms, we find photos of children engulfed in mud and blood, videos of howling rockets rampaging suburbs and main cities resulting in acute devastation. We often ‘like’ the posts or maybe click on the ‘sad’ or ‘angry’ reaction, we even share the posts once or twice. But does that ignite any humanity in our soul?

Syria has been in a state of war since years. People that are being killed there, are being killed like insects and flies, in a cluster, every day, every night. International, developed, first world countries (read: West) is uncommunicative at the moment, at all the moments, especially when a Muslim country is under conflagration. It might be because the neighboring Muslims and the Muslim nations, at large, are dumbfounded. 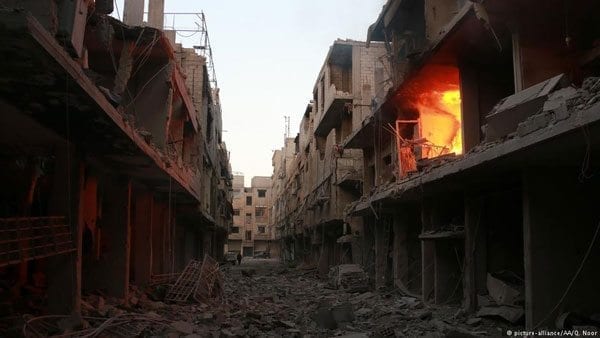 Social media supposedly has occurred as a blessing for entire humanity, we notice men and women fighting for their rights. They talk about empowerment, equality, initiate awareness campaigns for abundant causes. In short, social media has quite a reach and the ability to change moods and perceptions. Check-ins and ‘feeling something’ have taken over, actually having empathy for a person or a cause.

Although the massacre is underway since a week, we have noticed social media posts floating latest from yesterday, when the viral photographs and videos have become so heart-wrenching that sleeping without hassle has become a hassle itself. We’ve quite expected people who are celebrated in Pakistan and abroad to raise a voice for the oppressed, but, either other events that are happening in the country are more important or Syrian toddlers are lesser of humans. Out of abundant of acclaimed celebrities that carry a gigantic fan following, charitable organizations or an opinion on issues; few have come forward to raise their voice.

Pakistan’s favorite cricketers, Shahid Afridi and Shoaib Akhtar have expressed their concern against the inhumane oppression in Syria on Twitter.

The Ongoing siege in Eastern #Goutha #Syria is keeping out life saving medicines, targeting children and other innocents. This needs to stop immediately, the international body needs to act and register their presence.

This genocide needs to be stop or more people get killed in this conflict over piece of land ..
My heart is drowning seeing those pic in Syria & around the world .. pic.twitter.com/goqJV1QiMd

Hearthhrob Hamza Ali Abbasi has described the horrifying scenes of Syria and world’s silence by quoting a Hadiath.

Armeena Khan is one of the celebrities to speak on every major issue not just in the country, but in the world, at large. She has taken her grief to Twitter in order to make a prayer for the people who are watching their homes turn to ruins and their loved ones to ashes.

“Open season” on #Syria currently. The events are just too, too disturbing. Latest is that the war is about to get much, much worse and bigger. ???????? May God keep the innocent in HIS protection.

In another tweet, she has urged people to make #Syria a trend so that the world would know how massive is the populace which stands with them.

Can we make #Syria trend please? Let’s raise awareness. The senseless killing HAS to stop. You don’t have to RT my tweet just type #Syria and tweet it. Together we can do everything. ????????

A devoted mother, Mahira Khan has come forward to tweet about the ongoing catastrophic condition that has shaken Syria to its core, killing innocent children in a desultory manner.

Khan also re tweeted the video of a Syrian girl.

Marwa Hocane has proved to carry a heart that beats for the world. She tweeted a heart-melting picture that is being re-tweeted by her countless fans.

What a terrible terrible world this Flower has been sent to.. #Syria I urge you all to say a prayer for those who’re suffering & those who have passed away.. it’s the least we can do! My heart is in pieces.. #Ghouta #SaveSyrianChildren pic.twitter.com/MHNsY7r0RB

What have we become?? We’re brutally killing such beautiful flower like children??? Everyday.. #Syria #SaveSyrianChildren This world failed You Syria ????

Pakistani designer, Feeha Jamshed has also mentioned the world is a disgrace to humanity, she says.

We talk about life, we talk about our issues like it’s the end of the world & maybe for some it might be but the real genocide is happening outside our bubble where everyday the world ends and begins to end again. We remain silent. The world failed you #Syria ????

Meanwhile, Esha Gupta and Ajaz Khan happened to be the Bollywood celebrities to condemn this ferocious apocalypse.

So sad humanity die , if Americans dying called terrorism what about innocent children killed Daily in Syria ,why paid media not cover this and no one taking on this @ReallySwara pls Tweete @BeingSalmanKhan pls Bhai pic.twitter.com/ZSTqBUiiYK

I don’t care which country or religion or government I have, humanity is dying. The children are dying and it needs to stop,now #SyriaIsBleeding pic.twitter.com/8EVPXgcScT

We, at ARY, are absolutely saddened by the atrocious conditions faced by juveniles, men, and women in Syria. We pray for their safety and for the safety of entire humanity.

We didn’t post any videos in this story because we didn’t want to show the harrowing scenario our brothers are into.

Give your feedback in the comments.