Muqabil begins with a story that reveals a young girl Parisa who’s an introvert and doesn’t mingle with any one at all, her being aloof really bothers her mother who is a social butterfly and is very active when comes to attending events and what not.The drama serial gives you something to look forward to as the character of Parisa is very intriguing, but one thing is clear that she is very protective towards this little girl who is her maids’ daughter. She thinks men out there are no less than animals and solely want to physically abuse a woman.

Her worried mother only wants her to get hitched and have a happy married life, but Parisa has zero intentions of that, we wonder what dilemma she’s in. Moreover, her father is a very supporting man who understands her and seems to be okay with Parisa keeping to herself. Initially we assumed that there is certainly something wrong with Parisa which is why she’s socially awkward. 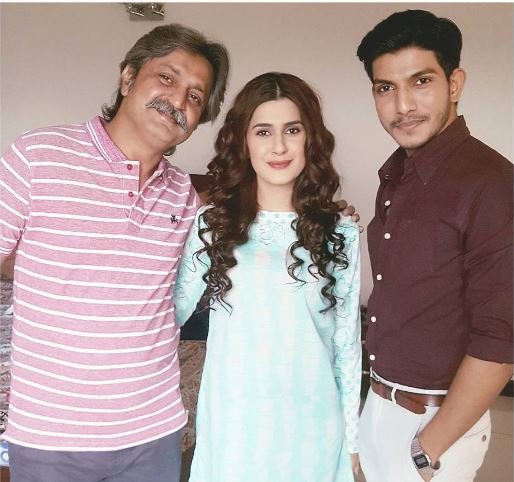 Her mother has a very trusted employee who she has a blind faith in, Mehmood basically is her right hand and she absolutely love him. Her oldest employee is someone who she can rely on more than anyone at all. Parisa’s mother has sleepless nights because of her and Mehmood is aware of that, but that’s not even the bigger problem. Parisa lives in her own little world that she has created and she likes that.

However, as the drama moved forward it was revealed that Parisa was molested when she was young, this disclosure of secret left her psychiatrist dumbfounded! When she inquired, Parisa refused to tell her who that animal was, but makes it certain that this news doesn’t get to her mother. This is the reason why Parisa is aloof and doesn’t blend in. Now we know why she’s an outcast.

Till the next episode comes in we can wonder if Parisa’s mother will ever know about her situation? Who raped her when she was young? Is Mehmood the culprit? Will Parisa agree for marriage? Find out in the next episode of Muqabil on Tuesday at 8.00 pm only on ARY Digital.

10 Reasons why Armeena Rana Khan is an absolute dream girl of men out there!