JAWANI PHIR NAHI ANI on the sets of JEETO PAKISTAN!

An episode you should not miss! 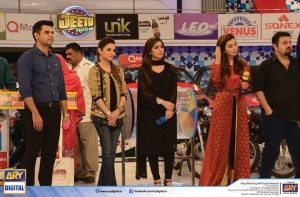 The cast of the upcoming movie “Jawani Phir Nahi Ani” has been in the spotlight for aggressively promoting the film worldwide. the cast of film recently graced the popular show of ARY Digital “Jeeto Pakistan”.

He also joked about Fahad Mustafa leaving ARY and introduced himself as the new host.

Moving further,  Fahad enters the stage and wins his hosting rights through a bet of 50 push ups while Butt just stays their lying on his tummy.

Fahad Enters The Stage and Wins His Hosting Rights by arydigitalofficial

After a few round of games, Sarwat Gillani and Ayesha Khan join the boys on stage, all dolled up in glamorous outfits. Sarwat Gilani paired her denims with black and gold while Ayesha Khan looked stunning in red!

The second set of guests was Wasay Chaudry and Uzma Khan. Wassay started with complimenting Fahad for his spectacular hosting and energy. Rest of the cast followed his lead and started flattering him too!

Mehwish Hayat was the final guest looking chic in striped pants and a black top perfectly accessorized in gold bling. When asked about her character, she answered that she’s playing the role of a “badmaash larki” which is very similar to her own personality.

The highlights of the show were power packed performances by the cast on the title track and the thaki thiki dance.

Both the leads Humayou Saeed and Hamaz Ali Abaasi were missing from the promotion. And the audience felt their absence.

The Slow Break Down of Pakistani Youth: Who is responsible??