Kumail Nanjiani took a dig at his own immigration

“We are the two actors who you keep hearing about but whose names you have trouble pronouncing,” quipped Lupita Nyong’o, as she came on the stage to present an Oscar award for production design with comedian and actor Kumail Nanjiani. “Actually, I have to complain… Kumail Nanjiani is my stage name.” Added Nanjiani. “My actual given Pakistani name is Chris Pine. So you can imagine how annoyed I was when the other, the white one showed up… The real Chris Pine,” he said. 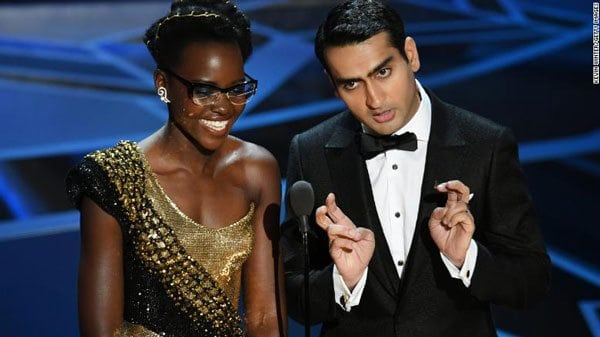 Kumail Nanjiani, of Pakistani descent, took a dig at his own immigrant status and supported ‘dreamers’ in the United States along with Nyong’o. The Oscar winner Nyong said, “Like everyone in this room, and everyone watching at home, we are dreamers. We grew up dreaming of one day working in the movies. Dreams are the foundation of Hollywood, and dreams are the foundation of America.” To which ‘The Big Sick’ sensation, Nanjiani added, “And so, to all the dreamers out there, we stand with you.

Nyong’o, who has won an Oscar for her performance in 12 Years a Slave, has also starred in ‘Black Panther’ which is being admired by a vast populace. Meanwhile Kumail Nanjiani’s ‘The Big Sick’ has been nominated for the Academy Award for Best Original Screenplay in 2018’s Academy Awards.

“We are also immigrants. I am from Kenya,” Nyong’o started. Nanjiani followed, “And I am from Pakistan and Iowa, two places that nobody from Hollywood can find on the map.” Both protagonists chose Oscars to raise their voice because of an ongoing debate in the United States which can actually protect hundreds of thousands of immigrants from banishment.

Amidst the debate and fabulous Annual Academy event, Nanjiani’s ‘The Big Sick’ failed to garner an award. The film also starred Bollywood veteran actor, Anupam Kher. The movie loosely revolved around the real-life love of Kumail and his spouse, Emily Gordon. It followed an interracial couple who dealt with cultural differences after Emily became seriously sick.”

However, when ‘The Big Sick’ was nominated, Nanjiani tweeted, “Wow. Emily and I met when she heckled me at a comedy show in the back of a diner in 2006. We wrote a movie about it and 12 years later we’re nominated for an Oscar. I will never get over this.” Moreover, after the award function, he shared his feelings on Twitter,

I’m focusing on the positive: Today is Day One of me as an Oscar loser.

Want to add something to the story? Tell us in the comments below.

When we confuse Societal Norms With Religion