ARY Digital launches a new show, Mubarak Ho Beti hui hai, under the banner of Big Bang entertainment. The show speaks about a topic which has been under debate for years now in our patriarchal society i.e. the birth of a daughter. Till date, in many places the birth of a daughter is grieved upon and looked at as if it is some sin. The motive of this story is to portray a society where daughters are considered a burden to the family. 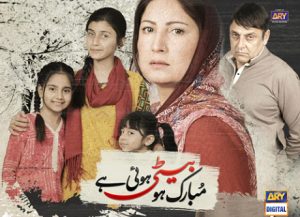 The drama will show the change of attitude towards daughters over a period of time.  Two different eras are shown to portray the cult responses and behaviors of social critics regarding daughters. How people, be it family or others, shun daughters at every step.

The story revolvesaround a family which considers the birth of a son a blessing.Saadiq is married to Naheed and they have three daughters. Aneela, the widow of the elder brother has two sons and is the favorite of the mother in law. When Naheed becomes pregnant with another child, Saadiq is hopeful for a son. But she gives birth to a daughter, making Saadiq leave her once and for all to marry Aneela in hope of a son. 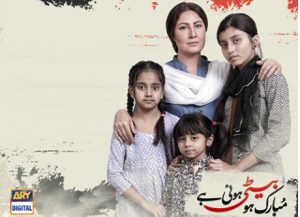 Big Bang Entertainment roping inbig names for this drama has Saima Noor playing Naheed, a prominent role, opposite Sajid Hassan. The cast also includesSaboor Ali, SabreenHisbani, Ali Abbas, NaheedShabeer, Fahad Sheikh and others. With BadarMehmood steering the ship and FaizaIftikhar providing a powerful story, we are certain Mubarak Ho BetiHui Hai will manage to leave an impact on the mind of the viewers and make them realize that daughters are indeed a blessing from Allah.