Astronauts on the moon could have easily identified Dubai since the region was beaming with stardust Thursday evening. In Dubai International Stadium, celebrities and cricketers from around the world came together to depict scenes of ecstasy and enthusiasm. 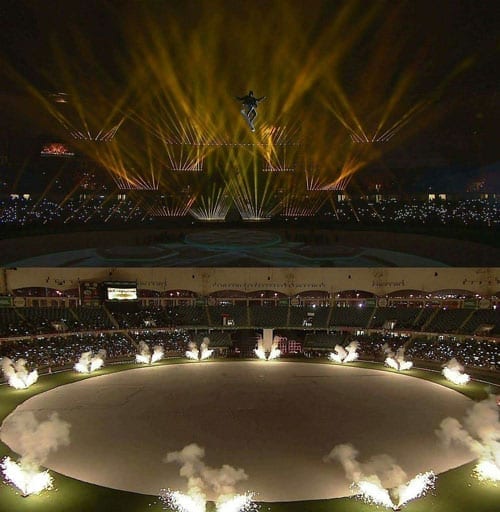 The third edition of the Pakistan Super League kicked off with a spectacular opening ceremony. Representatives from all provinces, exhibiting true colors of Pakistan came together to sing the National Anthem along with the audience.

PSL brand ambassador and our rock star, Ali Zafar was seen flying from the sky on his magical snowboard singing his super hit songs. He came to the ground through cable wires, meanwhile, dancers were performing in the middle of the stadium oozing utter energy. 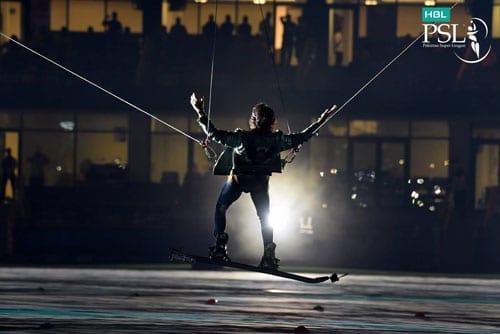 Gorgeous Hareem Farooq and dashing Bilal Ashraf stepped on to the stage to introduce performers and engage the audience sitting in the arena and the ones sitting in front of their screens, at home. Farooq looked exceptionally pretty in a traditional dress meanwhile Ashraf looked dapper in a black suit. “Here’s a thing about Pakistani people, they stay united in all the thick and thins and this is what PSL is about, staying together.” Said Farooq, as she welcomed the audience. 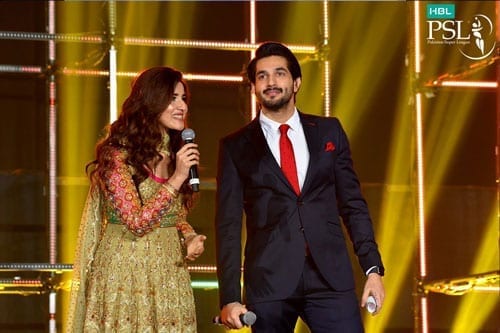 The ceremony included an extravagant projection show in the ground followed by the legendary, Rameez Raja’s talk about cricket. Raja then introduced all teams into the ground along with their owners, coaches, and other officials. The first team to appear in the ground was the rookie, Multan Sultans. Other teams included Islamabad United, Karachi Kings, Lahore Qalandar, Peshawar Zalmi followed by Quetta Gladiators. All teams came in a single queue behind their captains meanwhile Karachi Kings came in two queues because of the presence of the living legend, Shahid Afridi in the team. Half of the players came behind the skipper, Emmad Wasim, meanwhile, half of the team followed Afridi, with the owner, Salman Iqbal, in the center.

The official PSL 2018 trophy was carried by a model as she came in the ground from the stands via cables. She handed the trophy to defending champions’ captain, Darren Sammy. Raja then talked to captains about how they feel about PSL, the preparation and the fixture of Grand Finale in Karachi. 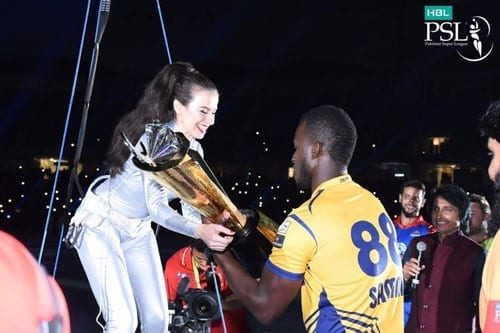 The man behind PSL, Najam Sethi, was then invited on the stage in applause. “PSL is the produce of uber dedication and constant efforts.” Said Chairman PCB, Najam Sethi.

A short silence and darkness unveiled the maestro, Abeda Parveen sitting on the stage. She started off with her classic, ‘Tere Ishq Nachaya’ followed by contemporary beats and performances by the Sufi dancers. She also sang her masterpiece, ‘Mast Qalandar’ and the audience couldn’t resist grooving with the lyrics. 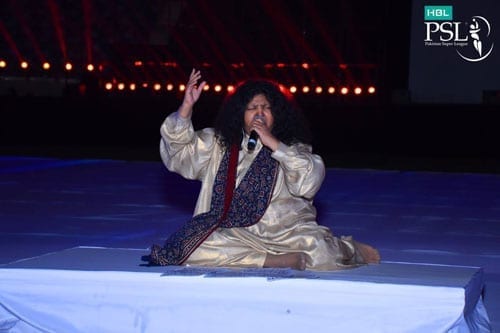 Shahzad Roy was then invited by the hosts to perform in front of the crowd. All the way from Florida, Jason Derulo shook the audience with his performance on the renowned number, ‘Swalla’.

Ali Zafar then took the stage to sing the official PSL 2018 anthem which made all the spectators stand and dance along. Astounding fireworks’ display was carried out at the end of PSL inaugural ceremony that made the whole arena pouring magic. 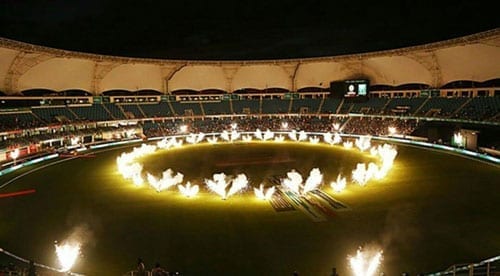 “May the best team wins.” Said, the ‘Parchi’ sensation, Hareem Farooq at the end of the ceremony. The inauguration was followed by the first match.

Did you watch the ceremony yesterday? In case if you missed, here’s the complete video.

Which team are you supporting? Comment below to let us know.

Pouting away all the frenzy