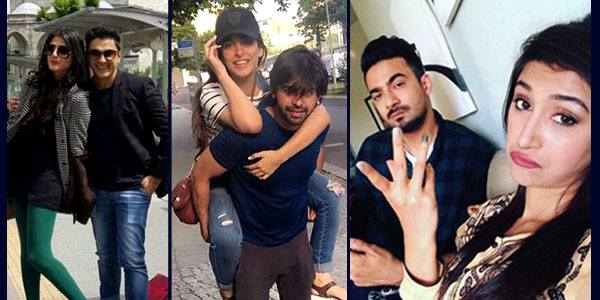 Finding the correct partner or better yet that ‘soul mate’ is probably easier said than done. People who get hitched to their one true love are truly blessed. There are these certain Pakistani couples who give us those goals! There’s no surprise that these stars are always under media scrutiny and have to cut a dash when stepping out, whether it’s a red carpet moment, social events or any other occasion. They certainly know how take our breaths away.

Pakistani celebrities who tied the knot are having there happily ever after which is no less than a fairy tale. Check it out.

The young and hip duo, Syra and Shehroz, met on the sets of ARY Digital’s famous drama series ‘Tanhaiyan Naye Silsile.’ The duo tied the knot in October after dating for some time, the two are one the most stylish couples of our industry and automatically become the limelight wherever they step in.

How adorable is that?

And suddenly I remembered! Love you to bits baby, may you have many many more and all of them with me and our little monster ???? we love you ???????????? @shahrozsabzwari

These lovebirds have been flaunting their affection for almost 2 years now, though they haven’t gotten hitched yet but they certainly know how to dazzle us with their style and sense of dressing. Urwa and Farhan leave no stone upturned when comes to supporting each other and going separate ways in terms of career.

VJ and actor, Ali Safina, tied the knot with the gorgeous model, Hira Tareen, in December 2013. This is what we call an eye-candy couple! They are like the VJs made for each other. We’ll be lying if we say that they don’t slay it!

Can I get a mashaAllah !? #Repost @hellopakistan with @repostapp. ??? ‘It’s great to have a partner to not only bounce ideas off with, but also one who talks about solutions instead of problems.’ It doesn’t get much hotter ???? our #hottestcouples of #2016 include the super talented @alisafina & @htareen – #hellopakistan #February #onstandsnow

Another terrific duo who are no doubt head over heels in love with each other are Maani and Hira. The two happen to take the couple goals to another level by showcasing their bubbly side to all of us!

Mani is trying to pout hahahahaha funnyyyy I love you Hhahahhahahah

This couple met a decade ago but tied the knot later, they are an epitome of style and have a beautiful little boy together. Gilani is all set for latest upcoming venture 3 Bahadur’s sequel.

The Wrong Number actor got hitched to this this starlet in August and the two stay on point with their style and relationship. It’s as if that cupid hit them both hard and the duo only seem to fall in love with each other every other day.

Have a nice weekend everyone..

The singer turned actor Goher wedded Anum in March 2014, the two are no less than Romeo and Juliet! The duo look striking together and manage to steal the limelight in various social events.

10 Places You Must Visit Before Dying!

Is Black The New ‘It’ Color?