Bioluminescence is an age-old phenomenon which is caused due to the presence of a special kind of algae, Plankton in water, specifically oceans. Because of a reaction, a chemical called luciferin is released that causes the ocean to glow and depict an absolute scene of Utopia.

Bioluminescence has been witnessed in oceans all around the world. Mosquito Bay in Puerto Rico is best known for its uber illuminant sight meanwhile, the list includes places like Halong Bay in Vietnam, Waitomo in New Zealand, Springbrook Park in Australia, San Juan Island in Washington, U.S and Big South Fork in Northeastern Tennessee and Southeastern Kentucky. 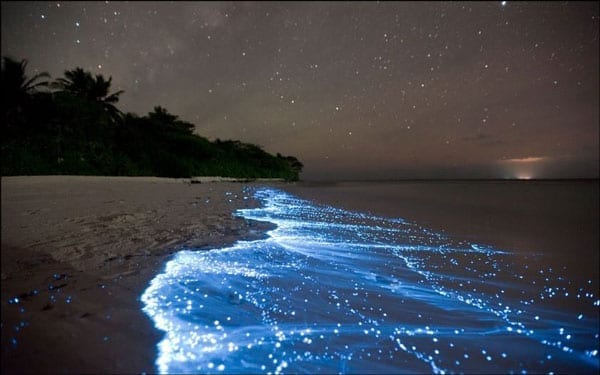 What if someone tells you that Pakistan is also a host to this breathtaking view? You will not believe. Will you?

Well, a group of local travelers, ‘Tactack’, went to a kilometer stretched, lesser known, Bhit Khori beach, near Mubarak Village. One of the travelers, Anum recalls, “We looked at the beach, and our jaws dropped. The ocean was glowing, blue.”

According to Anum, the whole ocean didn’t turn blue, waves that were colliding with each other or with the little rocks snugged in the ocean did. Out of excitement, when her group went to the shore to observe the process closely, she found out that the color blue was not just because of the waves collided with each other or the rocks, throwing pebbles into the ocean and punching the waves exhibited a similar scenario.

We cannot expect this heavenly scene to occur every night. This beauteous imagery can be viewed especially in the absence of the moon, near the new moon night. This is not the first time anyone has watched this mise-en-scene in Pakistan. Similar observations have been recorded at Astola island, Gadani and at Somiani beach as a traveler and photographer, Emran Mani says, “Is this real life? Clearly NO. The feeling when I first saw plankton. I was in search of this bizarre natural phenomenon since long, first ever encounter was at Gadani Beach in 2015.”

Hands down! This is surely going to go to the bucket list of everybody reading this, especially the people residing in Pakistan. Proves beauty can be found in the most unexpected places.

Have you ever seen this? Do you want to? Do you know about any other locations in Pakistan that we didn’t mention? Tell us in the comments below.

Ayesha Bumped into GIGI at NYFW18!