Pakistan’s Prime Minister Imran Khan has just become the top fifth most influential world leader of 2019 according to a report published by Twiplomacy.

Related: Here’s everything about the Royal Couple’s trip to Pakistan

Twiplomacy or Twitter diplomacy is the use of the social network, primarily Twitter by the diplomates and heads of intergovernmental organizations to conduct public diplomacy and diplomatic outreach. 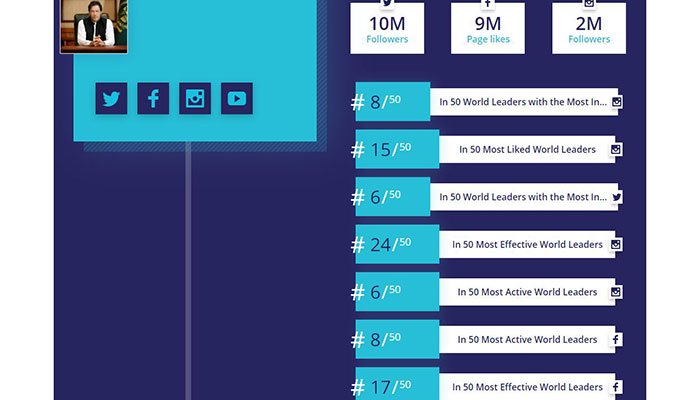 PM Imran Khan comes fifth in the list, with a whopping 6k RTs (retweet per tweet) on Twitter. Leaders such as Saudi Arabia’s King Salman, the US President Donald Trump, New Zealand’s Jacinda Ardern,  and Brazilian President Jair Messias Bolsonaro are above PM Khan in the list.

Apart from the huge number of retweets, PM Khan has been adding feathers to his cap for ample reasons. Here’s a list of a few more recognitions our Prime Minister is garnering globally.

This certainly is a joyous moment for the entire country and we hope PM Khan will garner exceptional praise globally in the future for his extraordinary struggle for the betterment of Pakistan. More power to you Mr. Prime Minister.