The second last episode of Akhri Station starts with Shabana working in a police officer’s house. After completing her work as a maid in the officer’s home, she goes back home and does all her household chores. As she was working and the children were playing, her husband came and started beating the children. She tries to save her children taking them inside. Next day, she packs the leftover food for her children and husband at her workplace and goes near the stove to make rotis. Officer’s wife starts to humiliate Shabana by criticizing and blaming her for theft. Out of panic, she drops a glass bowl on the ground which subsequently leads the officer to fire her from her job. She leaves the food she packed for her children, behind. 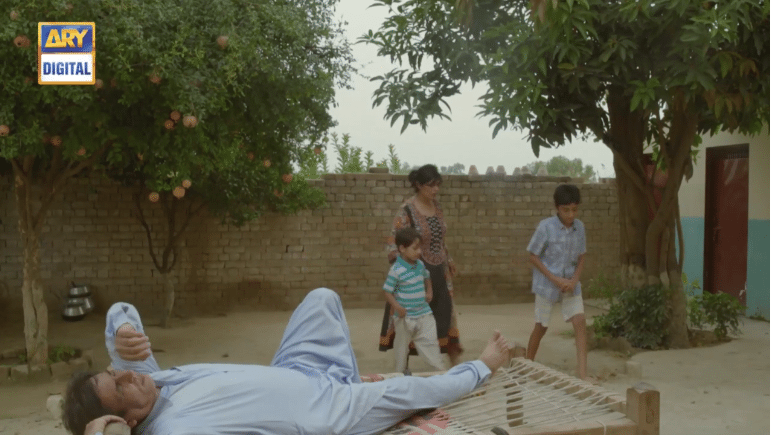 In the next scene, she is laying at home with her children using a hand fan for some fresh air when her husband arrives and sees that she has made the food rather than bringing it from the officer’s house. He chooses to sarcastically ask her the reason she has not brought the food. She starts to wash the dishes and her husband comes to her again, asking her the same question. She tells him that cop’s wife fired her, so no more food and no more money. Instead of supporting her, he starts bashing her, saying “Good that you’ve lost the job. Working like a crazy human gets you just 4500.”

On various occasions, she keeps insisting her husband to work rather than finding a job in accordance with his qualifications. In response, he says that all the people working in farms are illiterate. She expresses her desire to start working on the nearby farms on daily wages which leads her husband angry. She starts working on the farm among other women, cutting plants and aligning them. By the end of her first working day, she gets a 500 Rupees note which makes her quite happy upon her return. 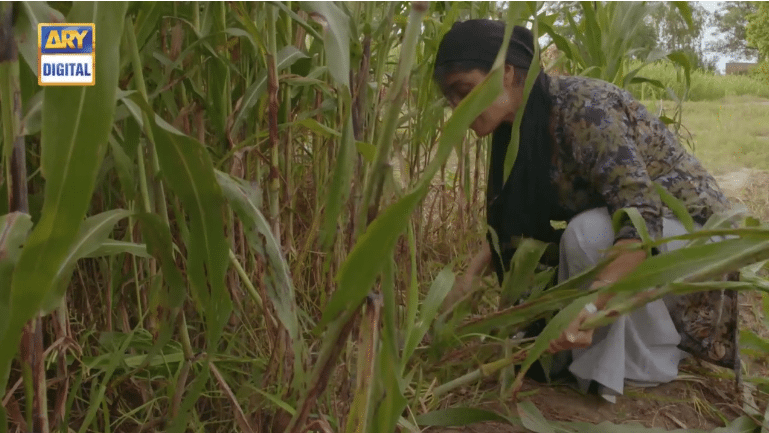 Elder child Omer tells that their principal has said that they will study on government’s scholarship for needy children. In response, his father starts bashing him and says, “All these acts are bringing shame to our family.” On the next day, she runs on her way to work, struggles to work between the dense fumigation spray. 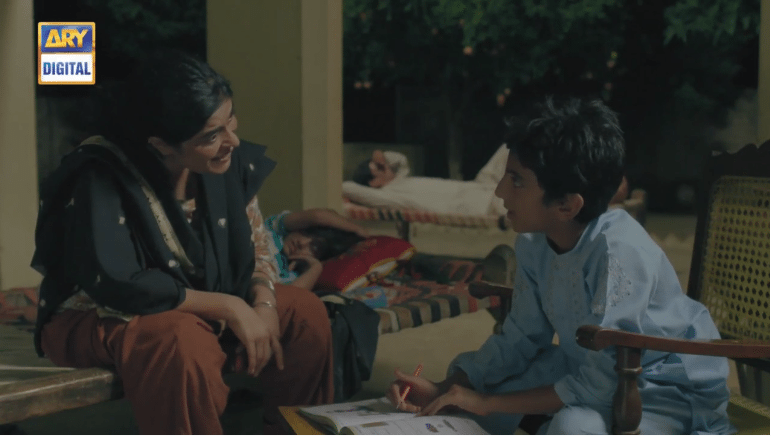 On her way home, she becomes happy because of the cash, the rain and because of the baby she is expecting. Her husband sits on the terrace, thinking something. He says, “They should not have fired me. They didn’t fire the person who was involved in corruption, they just fired me, maybe because I was on a contract.” She tells him that she’s pregnant and they will soon have a child but he ignores. He even blames her for being jealous of him when he used to earn well just like other relatives were. 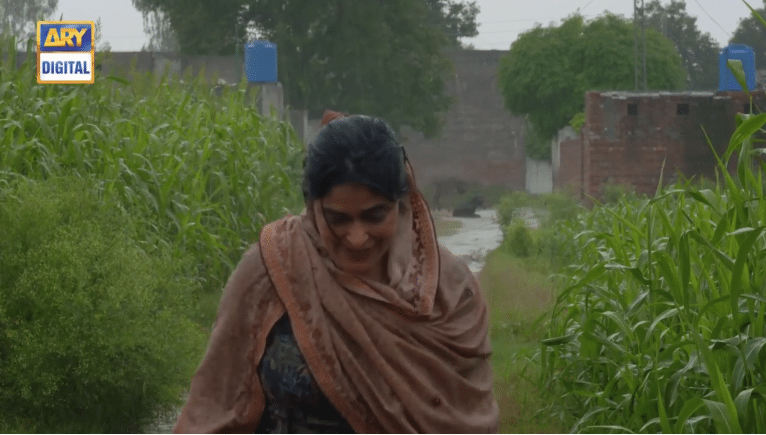 In the night, she sits to wash the remaining dishes and she gets utterly disturbed to see scars on her hands and swollen fingers because of excessive work. Meanwhile, on her work, she sees two women fighting but pays no heed to it. She grasps the crops but fatigues due to numbness. When she opens her eyes, words, uttered by her husband, makes her even more uncomfortable. He tells her that the baby has died while he was just eight weeks in the womb. He says that the reason of death as told by the doctor occurred to be chemicals that ooze out of the crop sprayers. 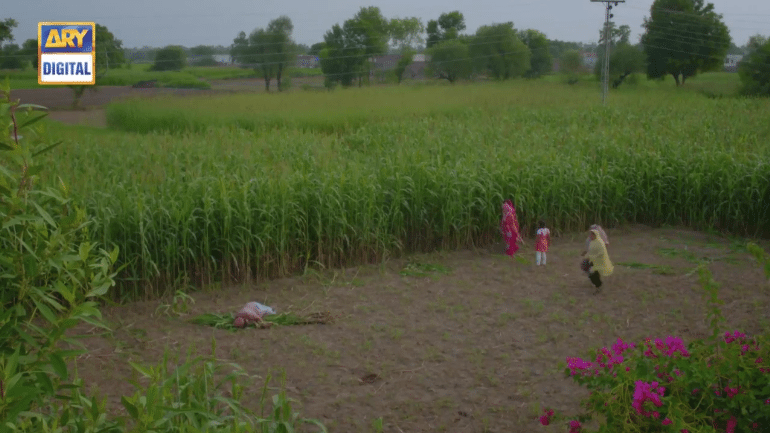 The director of Akhri Station, Sarmad Khoosat enters the room, he appears to be her brother. He says, “You should have come to Karachi in order to work. You should not have opted for farming.” He further goes on to the injustices women face in the country; a woman works like a man but the only thing to contradict happens to be their wage gap. Her husband in response says that he’s planning to possess the house for rent. Barkat, played by Sarmad Khoosat, in response continues, “What era are you living in? What is the difference between a man and a woman in today’s world? Someone has to work. If you lost the job, no problem, let her work. If you are afraid that you are compromising your dignity here, in this region, send her to Karachi where she can work in peace.” 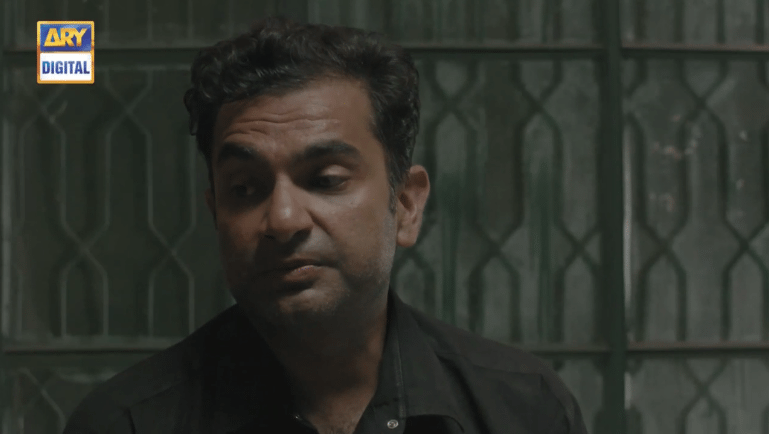 The scene is interrupted by all women sitting on the train again. Shabana says, “The reason I am going to Karachi is to find bread and butter for my family but I am afraid of how my husband is going to treat my sons during my absence.”

This episode delineates the horrible conditions women face from her family members to her surroundings. Foremost, a man is responsible for bread and butter for his family and even if he is not, he is responsible, he is the one who takes decisions appropriately which subsequently leads to the happiness of his family. A woman needs support from her family in order to succeed in life. She has to work regardless of how bad her family treats her. Would it not be appropriate if she is admired and loved rather than being humiliated?

You can watch this episode here,

Tell us your views about the story in comments’ section below.

‘Katto’, A Tale Of Dreams