Top 10 Reasons To Turn To Pakistani Cinema in 2015

With the earlier months of the year deeming to be quite slow in the release of notable films in Pakistan, it seems between May and September we have a great line up of films made by Pakistan and releasing in Pakistan in 2015. If you’ve seen the trailers of the films awaiting release in 2015 you may have realized a huge amount of potential and talent awaiting appearance on our big screen but if you cant find a reason to got to the cinema, below are a list of the our top 10 reasons to turn to Pakistani cinema in 2015! 10. Sikander Rizvi – Other than being the grandson of the Malika E Taranum of Pakistan Madam Noor Jehan and the owner of Xander’s restaurant in Karachi, Sikander is the male lead debuting in his first ever film, opposite Humaima Malik in the upcoming romcom ‘Dekh Magar Pyar Se’, the film is being slated for an August 2015 release.

The grandson of Madam Noor Jehan is a delight to the eyes, teamed up with a great story, Humaima Malik and set in the cultural heart of Pakistan, Lahore, Sikander Rizvi becomes number 10 on our list of top 10 reasons to turn to Pakistani cinema in 2015!

9. Imran Abbas, a name which is no stranger to the Pakistani drama industry and after featuring in a few Bollywood films, the boy next door star has become a global heartthrob! The actor recently appeared in a cameo role for a feature length film Abdullah, which even made its way to the glittery screens of the Cannes Film Festival. Imran has a small role but it will be his first appearance in a Pakistani film, hopefully his first stepping stone into the Pakistani film industry with many more hit films to come. This puts Imran Abbas at number 9 on our list of top 10 reasons to turn to Pakistani cinema in 2015!

8. Resham, the famous actress who debuted in the mid 90s opposite Baber Ali in Syed Noor’s Jeeva and since then has a long list of hit films to her name including Dupatta Jal Raha Hai, Kahin Pyaar Na Ho Jaaye and Ghunghat. Resham left the film industry a few years ago due to the decline of our film’s quality and made a huge name for herself on Pakistan’s small screens! With TV turning into her forte, Resham finally returns to the silver screen with ‘Swaarangi‘ a social drama also starring Ayub Khoso. With a gap of almost 6 years this will be Resham’s comeback film making her number 8 on our list of top 10 reasons to turn to Pakistani cinema in 2015! 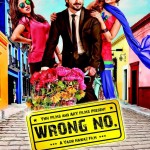 7. Danish Taimoor. If you had the chance to watch the hit Pakistani film Jalaibee, you would have noticed how Danish Taimoor had turned from a hopeful romantic from the drama industry to muscly badman in the film industry.

But in his next feature length film of 2015, (Wrong Number) Danish Taimoor takes on yet another look as a wanna be actor, from the trailer his acting looks typically on point with even a glimpse of a little bit of a hidden dancer. This puts Danish Taimoor on number 7 on our list of top 10 reasons to turn to Pakistani cinema in 2015! 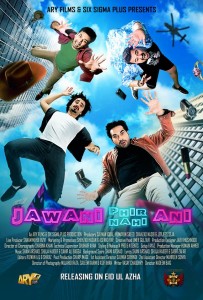 6. Hamza Ali Abbasi is the controversial actor/political worker whose remarks regarding item numbers landed him in hot water, with backlash from colleagues and fans, Hamza had to make constant remarks both on TV shows and via social media to clear his stance on items numbers.

He was even further hit with even more controversy when the trailer of his upcoming film ‘Jawani Phir Nahin Ani‘ was released. A fun packed film focusing on four friend including Hamza Ali Abbasi, who is seen topless emerging from a pool in the trailer. It would be interesting to see how much his stance on item numbers stands during this film, putting Hamza Ali Abbasi at number 6 on our list of top 10 reasons to turn to Pakistani cinema in 2015! 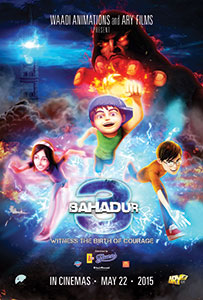 5. ‘3 Bahadur’, the creation of the one and only Sharmeen Obaid Chinoy, Pakistan’s Oscar Winner. The first ever Pakistani animation film look extremely promising. Fans have been eagerly  waiting over a year for the film after its first look teaser on the ARY Film Awards 2014.

The film focuses on a group of 3 school children. Other then being  the first of its kind as Pakistan’s first animated film.

It is also the first feature length  film by Sharmeen Obaid Chinoy, this puts ‘3 Bahadur’ at number 5 on our list of top 10 reasons to turn to Pakistani cinema in 2015!

4. Sohai Ali Abro the baby faced actress who featured in hit drams including Khoya Khoya Chand and Pyare Afzal is now coming to Pakistani cinemas in Yasir Nawaz’s ‘Wrong Number’. Other than being and extremely talented actress Sohai Ali Abro is quite the dancer, if you have ever been lucky enough to see some of her performances especially at some of our leading awards shows you will see why so many are mad over Sohai Ali Abro.

As far as dancing in her upcoming film is concerned Sohai Ali Abro will be featured in a hit dance number called ‘Selfiyaan’, with the huge craze surrounding selfies today teamed with the hit dancing of Sohai Ali Abro this is enough reason to put Sohai Ali Abro at number four on our list of top 10 reasons to turn to Pakistani cinema in 2015! 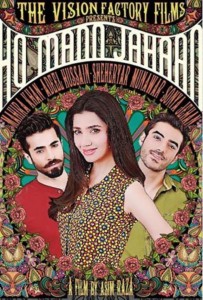 3. Adeel Hussain the talented actor who delivered to us amazing pieces of television in dramas such as Shukk and Mera Naseeb is finally making his way to the silver screen, after giving a slight clue with regards to his upcoming projects on Mahira Khan’s Show TUC The Lighter Side of Life, Adeel expressed his desire to do good work in Pakistani films, and as far as good work is concerned it seems he has hit the right chords as he will be appearing in two major films of 2015.

Based on their trailers Adeel will feature in Momina Duraid’s ‘Bin Roye’ and Asim Raza’s ‘Ho Mann Jahaan’. With two of Pakistan’s biggest directors and two of Pakistan’s most anticipated films Adeel has made his mark as number 3 on our list of top 10 reasons to turn to Pakistani cinema in 2015! 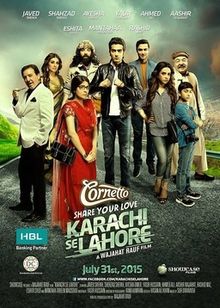 2. Ayesha Omar will forever be known as Khoobsurat, the evangelical wife of Nabeel in the hit TV comedy Bulbulay, but is breaking this stereotype and will be making her first film debut in 2015 with the release of Wajahat Rauf’s Karachi Se Lahore! The films trailer has garnered a huge amount of support recently as it features the two biggest and famous cities of Pakistan, doubled up with a road trip and a hit cast.

Ayesha is seen at the end of the trailer dancing away to a hip dance number “Tooty Fruity” which according to media sources she also sung herself. The song had been choreographed by famous dancer Wahab Shah and is a treat to the eyes. Ayesha Omar’s singing and dancing tag team in Karachi Se Lahore puts her at number 2 on our list of top 10 reasons to turn to Pakistani cinema in 2015!

And finally number 1, Mahira Khan! The Humsafar superstar who made her name for being the damsel in distress in Humsafar but instantly won every viewers hearts with her heart wrenching cries is featuring in two major films in 2015. After her supporting role in ‘Bol’, Mahira will be sporting the main role in both films Ho Mann Jahaan and Bin Roye. If you have seen the trailers of ‘Ho Mann Jahaan’ and ‘Bin Roye’ you will see that Mahira is quite the dancer and by far one of the most perfect faces to represent Pakistani cinema.

With both films featuring huge name directors Mahira seems to be the most promising star to have come out of Pakistan’s booming new film industry, with huge names joining her including Sheheryar Munawar Siddiqui, Adeel Hussain and Humayoun Saeed, both films look promising even more so that Mahira Khan is the lead actress in both. Due to this it is definite that Mahira Khan is number 1 on our list of top 10 reasons to turn to Pakistani cinema in 2015!

Faisal Shah is an analyst attempting to make sense of the sorry situation we call the Pakistani government. He wants to clear the misconceptions by taking an objective view on the day to day events in Pakistan.
He is great supporter of Pervez Musharraf and the idea of a new and changed Pakistan.
He believes that a presidential system is not the only need of our country.

Chup Raho – A must watch drama!