Living in a patriarchal society often blinds us to even barely notice the extensive elbow grease and psychological tiredness women of our society go through. We live in a woman’s womb for tentatively 270 days, she bears us from being a cell to a complete human being inside of her body, let alone delivering a fully born human child.

Women work for the entire day at home from cleaning to cooking to washing clothes and they work even after their husbands are home working eight hours. Specifically, in Pakistan, women are often neglected. Women are victimized, not just in rural areas but in urban centers as well. The victimization of a woman comes irrespective of how literate a family is, a woman has to fight for the most basic of her rights.

On  Women’s day, we have interviewed a woman who possesses subtle power, a pure heart, and abundance of humanity. Roshaneh Zafar, the founder of Kashf Foundation, is an anchor for a huge populace of women residing within the boundaries of Pakistan who have gotten a ‘say’ and a ‘place’ in the society that has not been theirs. What ignited you to initiate a foundation like Kashf?

After doing my Masters in Development Economics from Yale University, USA, I moved back to Pakistan and worked with the World Bank in the water and sanitation sectors. This required me to travel all around Pakistan especially to far-flung regions where infrastructure and resources were scarce. Everywhere I went, I spoke with women from low-income communities and realized that if women were able to gain financial independence, they could positively transform their families and ultimately their communities. Then a chance encounter with Dr. Muhammad Yunus opened the world of micro-credit to me and a visit to Bangladesh showed me how financial inclusion empowered women and helped address other issues as well. 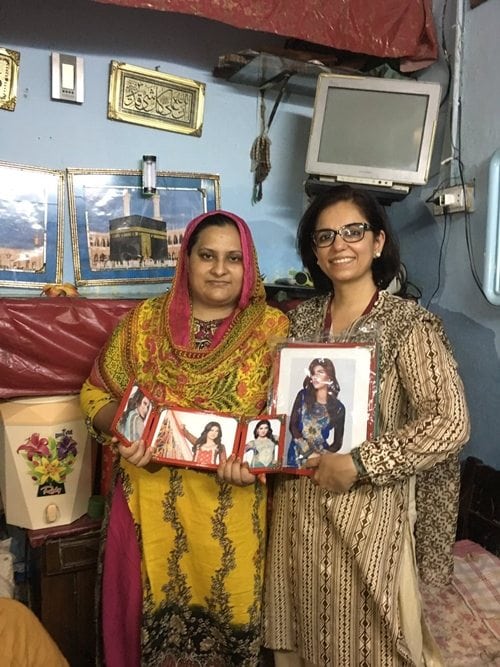 I knew Pakistan was in dire need of something similar and in 1996 Kashf Foundation became the first specialized microfinance institution catering to the needs of women micro-entrepreneurs, enabling them to improve their standard of living and contributing to their economic well-being.

How did you come up with an idea of representing these women via dramas?

The role of media is pivotal in terms of influencing and transforming mindsets and under Kashf’s social advocacy program, the Foundation has used multiple media tools to effectively drive social change. Over the years, we have been using the principles of ‘theater for development’ to initiate a process of change at the grass root levels by developing short street theatre performances on key social issues. These have been an essential platform for raising awareness and stimulating dialogue but while they are an effective medium, their outreach is limited. Television, on the other hand, has massive potential to reach out to a great number of people and provide a new narrative to society on issues faced by women. Moreover, I realized most TV representations of women in Pakistan especially those who are financially independent are shown as careless of their household duties, are negligent of their children/husband’s needs and generally their primary duty should be about child rearing and performing household chores. Thus, in order to make our messages reach out a larger audience and change perceptions regarding women’s economic empowerment, we chose to innovatively address women’s issues through its television campaigns.

In all three of our Television productions, namely Rehaii, Udaari and currently on air, Aakhri Station- we have deconstructed myths around important social issues and essentially, provide positive messages of hope in the end.

Did any woman’s story shake your soul?

Throughout my life, I have met extremely inspiring women whose tales of resilience and unending positivity is beyond spectacular. They are unimaginably strong in the face of adversity and I can list down a million stories, each one as amazing as the next. However, one story that has always stayed with me and struck me to the core is of an acid attack victim.

I met this beautiful woman in Karachi while we were researching for our drama series, Aakhri Station. Half of her face was disfigured and burnt but she was not hiding it. I was so inspired by her confidence that I asked her how she felt and exuded such amazing self-confidence.

She was absolutely right. Acid attacks are an extreme form of violence in our society, a manifestation of male control and power and in majority cases, the victim (survivor) is blamed for the act. We collectively need to create more awareness regarding such behavior and have stricter laws around acid burn crimes.

Do you believe you’ve gotten to a point of success you’ve always thought you would?

I still have miles to go before I sleep! We have achieved a lot of milestones and come pretty far but not far enough. Domestic violence is still an endemic in Pakistan and statistics show that an estimated 70 to 90 percent have suffered some form of abuse. Further, we are still ranked as the second lowest on gender equality in the Global Gender Gap (143 out of 144 countries.) Thus, there is yet A LOT that needs to be addressed. However, if you determine success in the number of women we have been able to reach out to then we’ve accomplished reaching out to millions of poverty-stricken families and helped them out of the clutches of poverty. Kashf currently has an outreach of 354,000 clients and has cumulatively disbursed PKR 72 billion. We have a total of 286 branches across 50 districts in all four provinces of Pakistan.

Explain Kashf Foundation and the way things work there?

Kashf Foundation was established in 1996 as the first specialized microfinance institution in Pakistan catering to the needs of women micro-entrepreneurs through a suite of sustainable financial and non-financial products and services. Kashf’s products and interventions are designed and developed with the intention to provide pro-poor and client-centric services to women micro-entrepreneurs while keeping in view the special challenges and hurdles that women face in low-income communities. Moreover, Kashf is an organization committed to developing an enabling environment for women entrepreneurs. It invests in building the capacity of its clients, is involved in creating social awareness on gender-related issues and improving the vocational skills of women and girls. Under its social advocacy component, Kashf has trained 1.5 million low-income women on financial education since 2010. Moreover, 26,710 women have graduated from the Business Incubation Labs program after receiving training on business development, marketing, and product design. To help create awareness on the rights of women and the importance of female entrepreneurship, Kashf has undertaken gender justice trainings with 175,293 individuals (males, females and youth) in the communities and conducted 1,100 community-based street theatre performances with 115,000 participants on relevant themes regarding gender norms, women’s rights and gender equality.

As an organization committed to the promotion of women’s rights and gender justice, Kashf has been innovative in leveraging mainstream media to raise awareness on critical social issues. Kashf has created and produced three drama serials for television and highlights various social issues through multiple media tools.

What are your goals regarding the betterment of womanhood?

Our vision and mission is to strive for a poverty-free and gender equitable society. Our goal is to empower women by enabling them to become active agents of social and economic change in the society. Having garnered utmost affection of people across the world, ‘Akhri Station’, a project of Kashf Foundation, led by Roshaneh Zafar, has become a true voice of the women of Pakistan.

Here is an adaption of the legendary Amjad Islam Amjad’s poetry ‘Mujhe Apne Jeenay Ka Haq Chahiay’ which has been sung by maestro Tahira Syed along with Zafar herself. The song has been sung as an OST for ‘Akhri Station’.

Women like Zafar are the real pivot for motivation to plenty of women who feel oppressed, traumatized and victimized. She’s an inspiration for not just the women of our society, but for the entire humanity.

We, at ARY, wish Roshaneh Zafar, very best of luck in her future endeavors. May she continue being an inspiration for entire humankind.

More Power to you, Roshaneh.