In Pictures: Your Favorite Celebs on Pakistan Day

Pakistan day is so much more than just a day off from work and school. Unlike the independence day, no one in the entire country buys national flags, badges, and other accessories. However, ample national events are carried out on 23rd March, but a vast populace does not pay much heed and rather, carries on with sleep.

Pakistan day is celebrated throughout the country on 23rd March to pay homage to Muhammad Ali Jinnah and other freedom fighters for presenting the first resolution that demanded a separate homeland for Muslims in east and west regions of the Sub-continent at Minar e Pakistan, Lahore.

Where a lot of people chose to stay home and spent the day with family, few actually went out under the sun to celebrate Pakistan day with uber-enthusiasm oozing absolute patriotism. Our favorite celebrities attended parades and spent time watching jet shows and disciplined marches.

The maestro was awarded the Pride of performance award (sadarti Aizaz ba rai-Husn-karqardagi) in recognition of his over thirty years of services in the field of drama, theatre, music and for his unmatched work in promoting children education via media.

Khaled Anam honoured with Presidential Pride of performance (sadarti Aizaz ba rai-husn-karqardagi)in recognition of his over thirty years of services in the field of music, theatre, drama and for his endless work in promoting children education through media. #KhalidAnam #TehminaKhalid #PakistanDay #TamghaEImtiaz #ProudPakistani #Pakistanzindabad

The skipper of Pakistan’s cricket team, the talented, Sarfaraz Ahmed received ‘Tamgha e Imtiaz’ for his astounding skills and for bringing the T20 world cup home.

Sana Javed looked exceptionally gorgeous in a traditional attire celebrating Pakistan day with other celebrities at the Pakistan Day Parade.

The father of ‘Masoomana Sawaals’, the all-rounder journalist, Wasim Badami posted a photo on his social media platform, slaying in a white ‘Kurta Pajama’, complemented by a green waistcoat.

Known for his binge humanitarian work, the philanthropist, Ansar Burney attended the parade with artists.

The beautiful singer, Sarah Raza Khan performed in Nepal after the Chief of Nepali Army on the occasion of Pakistan Day with complete ace. The amount of excitement she possessed can be seen in her ‘ALL CAPS’ caption.

After an Amazing Event in Nepal !!!THANK YOUUU NEPAL FOR SHOWING SO MUCH LOVE FOR PAKISTAN AND US !!! ALHAMDU LILLAH It was indeed extremely Prestigious Moment when Respected Cheif of Nepal Army his Wife ,Pakistani Ambassodor & all Nepali Audience Celebrated Nepali Tracks and Punjabi equally with full Energy ?????????????? ???????? #SupersuccesfulConcert #SuperAwesomeTeam #PakistanDayInNepal #PakistanDay #PakistaniDress !!!!!!

The young singing sensation of Pakistan, Asim Azhar attended the 23rd March Parade and posted a picture with Hercharn Singh, who is the only Sikh army officer Pakistani army possesses.

Humayun Saeed was also one of the celebrities who attended the National Day parade in Islamabad. He thanked ISPR for having him at the parade. Celebrities like Adnan Siddiqui, Faakhir Mehmood, and Fakhar e Alam can also be seen in the photo.

The heartthrob, Faysal Quraishi dedicated a whole episode of his show ‘Salaam Zindagi’ to Pakistan Day.

The starlet, Mawra Hocane put up a photo of herself wearing a Pakistan cricket team jersey and opted to write to write a big note depicting her love for the country.

Dolled up in a desi apparel, Urwa Hocane looked fabulous with her husband, Farhan Saeed looking as classy and chic as ever. He wore a white ‘Kurta Pajama’ embellished with a white waistcoat along with a ‘Peshawari’ sandal. 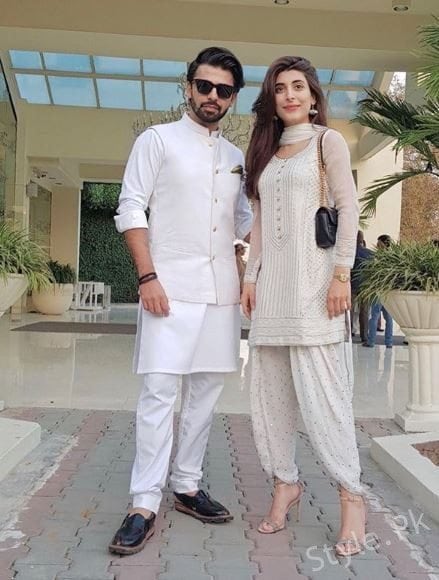 Shehzad Roy was thrilled to watch the free fall in 23rd March’s Parade in Islamabad. He was also honored with a ‘Sitara e Imtiaz’ in the ceremony.

We hope, this enthusiasm for the country in our favorite celebrities never fade.

‘Azaadi’, all revved up to show its first look

These Celebrities will perform in PSL 2018 Final