With powerful content, intriguing stories, astoundingly skilled actors, and flawless productions, ARY Digital reclaims the realm for November. ARY Digital outdoes itself by officially becoming the highest watched satellite television channel for the entire month. Not just on the television, at least three ARY Digital dramas are trending on YouTube right now with the first episode of Sinf e Aahan trending at number 2 across Pakistan. 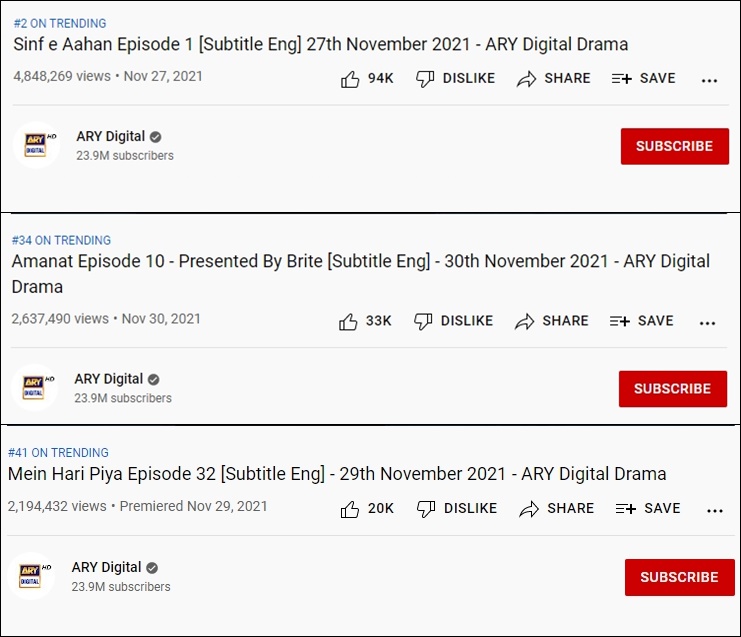 The dramas that had been broadcasted throughout November include Baddua, Amanat, Berukhi, Neeli Zinda Hai, Main Hari Piya, Benaam, Bulbulay, Good Morning Pakistan, and of course the new and bigger version of Jeeto Pakistan. Moreover, after the conclusion of Mere Apne, the channel planned to roll out Benaam, and then the newest visual delight, Sinf e Aahan, that made sure the channel stays on the top.

The highly anticipated drama, Sinf e Aahan has just premiered its first episode and the drama is already making rounds on both television and social media alike with 7.9 TRPs and a whopping 4.8 Million views on YouTube, which are increasing as you are reading this.

We take this opportunity to thank you for your loyalty and positive feedback.