“I have kept this family tradition of ours alive,” says Ustad Rahat Fateh Ali Khan

Ustad Nusrat Fateh Ali Khan’s daughter had spoken to the media at the Lahore Press Club about her plan to send legal notices to the people and companies who had used her father’s Kalams without permission. She told, “I am the sole heir of Nusrat Fateh Ali Khan and the copyrights of my father’s songs are only with me. If anyone wants to sing my father’s songs, they need to seek permission from me.” Responding to a question about taking a legal action against Rahat Fateh Ali Khan, she said, “Rahat is my brother and I will not take any action against him.”

In the wake of the revelations made by Ustad Nusrat Fateh Ali Khan’s daughter regarding copyright infringement of Ustad’s Kalams, his nephew, Ustad Rahat Fateh Ali Khan has come up with his statement to dissolve the clouds of ambiguity. Upon asking whether he needs permission to sing Kalams of the maestro, he says, “I’m the successor (Janasheen) and the adopted son of my Ustad and Uncle Nusrat Fateh Ali Khan. Why would I need any permission? This has never been the scenario in the history and legacy of our family which has a rich heritage of over 600 years in the field of Qawali and Sufi music. When my father Ustad Farrukh Fateh Ali Khan and Ustad Nusrat Fateh Ali Khan recited Kalams of my Dada Ustad Fateh Ali Khan and other members of our family, no permissions have seemed.” “We are a family and everything belongs to us as a family. We have never been divided,” he adds.

In lieu of commenting on Ustad Nusrat Fateh Ali Khan’s daughter, he chooses to talk about his relationship with Ustad Nusrat Fateh Khan and his legacy. “I have kept this family tradition of ours alive since I was made the successor by Ustad Nusrat Fateh Ali Khan over 20 years ago. I have taken the torch of this family’s tradition unconditionally, not seeing whether it is day or not, a flight or a journey of a day long and lot more including performing for days and weeks initially when both my father and my Ustad had passed away, I, as Rahat Ali Khan was there to take my family’s name forward. I know how hard it has been. If you see that, I have taken my family’s name and performed at the Noble Peace Prize, in fact, I was the headline performer there, I have performed at the United Nations General Assembly, I have a  music room named after me at the Oxford University Music faculty.” He assures that the legacy will pass to generations, “The name that is attached with me apart from mine, it’s my family’s name and legacy which I’m carrying and as a tradition, tomorrow my brother and son will carry it as well.” 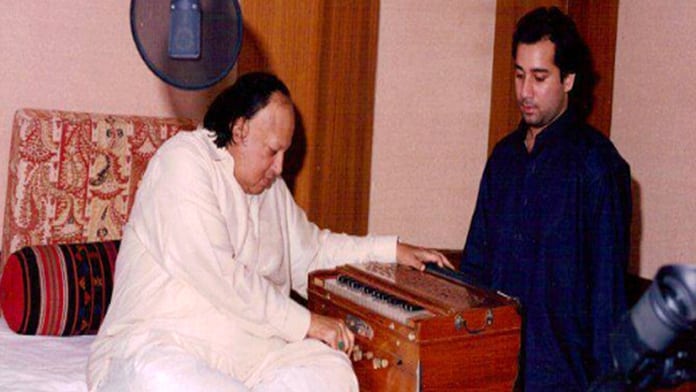 The singer applauds his team to be able to manage his schedule in absolute chaos, “I have one of the best teams and management who has taken the name of our family globally at a time when Qawali is nearly forgotten, I have a world tour this year which is dedicated only to Qawali.”

Maestro’s Producer & Promoter, Salman Ahmed adds,” There have been many golden voices such as of Mohammed Rafi Sahib, Kishore Kumar Sahib, Jagjit Singh Ji and many others but at times forgotten, as no one is there to keep it alive with devotion and endless hard work. In this case Ustad Rahat Fateh Ali Khan has kept the flame of his family alive by relentlessly performing across the globe, thus till date Ustad Nusrat Fateh Ali Khan is remembered on daily basis as his name is taken and kept alive by his son and successor, Ustad Rahat Fateh Ali Khan, who does not see anything else but to keep the family’s tradition alive.

Our favorite singer sums up by saying, “I hope this clarifies any ambiguities and the fact that I do not need any permission to sing what belongs to my family and me”.

Well, we are uber satisfied by this courteous response from the ever graceful singer. More power to you Ustad Rahat Fateh Ali Khan!

What are your views on this story? Tell us in the comments below.

Shan-e-Ramzan Is Winning Copious Hearts For All The right Reasons!