Mohsin Abbas urges people to open up about depression

Known for his impeccable acting skills and an impressive persona, the immensely talented, Mohsin Abbas Haider has been winning innumerable hearts throughout his career. Talk about playing Feeka in Lashkara or the ferocious villain in Meri Guriya, Mohsin is unarguably the perfect epitome of versatility. But the treasure of the talent he has does not end on merely acting, the actor is an owner of the majestic voice and has intoned many surreal songs, including ‘Uddi Ja’ from Coke Studio.

The ‘Meraas’ lead actor has recently taken to Instagram and Facebook to tell all his fans and friends that he is suffering from depression. He writes, “Depression is all set to kill me soon. I just wanted to say thanks to the people who caused it.” As soon as the actor posted it, ample fans and friends including, Ayesha Omar, Anoushey Ashraf, Osman Khalid Butt, Ali Gul Pir, Natasha Baig, amongst others have exhibited outstanding outpour of concern, love, and prayers.

However, the Muqabil sensation deleted the post after a couple of hours, only to put up a video delineating his strong message regarding depression. He captioned the video with “Love you All #LoveAndPeaceIsAllWeNeed… P.S. get rid of all those Toxic People in your life.” He started off the video by thanking all his fellow celebrities and fans for their “love, support and concern.” He further reaffirmed that everybody endures depression in a way or another. He continued, “Sometimes we talk about it and I personally felt better after opening up.” He said that he is not that kind of a guy who would reveal his personal life in front of anyone but there comes a moment when you feel it is the “end point.”

In the last few seconds of the video, Mohsin urged people to speak up about depression in lieu of staying silent because “it helps.” This motivational video got huge positive feedback from not only his fans but from his friends in the fraternity also.

The gorgeous, Ayesha Omar, the supermodel, Nadia Hussain, the enchantress, Natasha Baig, the surreal, Sadaf Kanwal and the stylish, Mathira instantly commented to express their love and admiration for the actor. 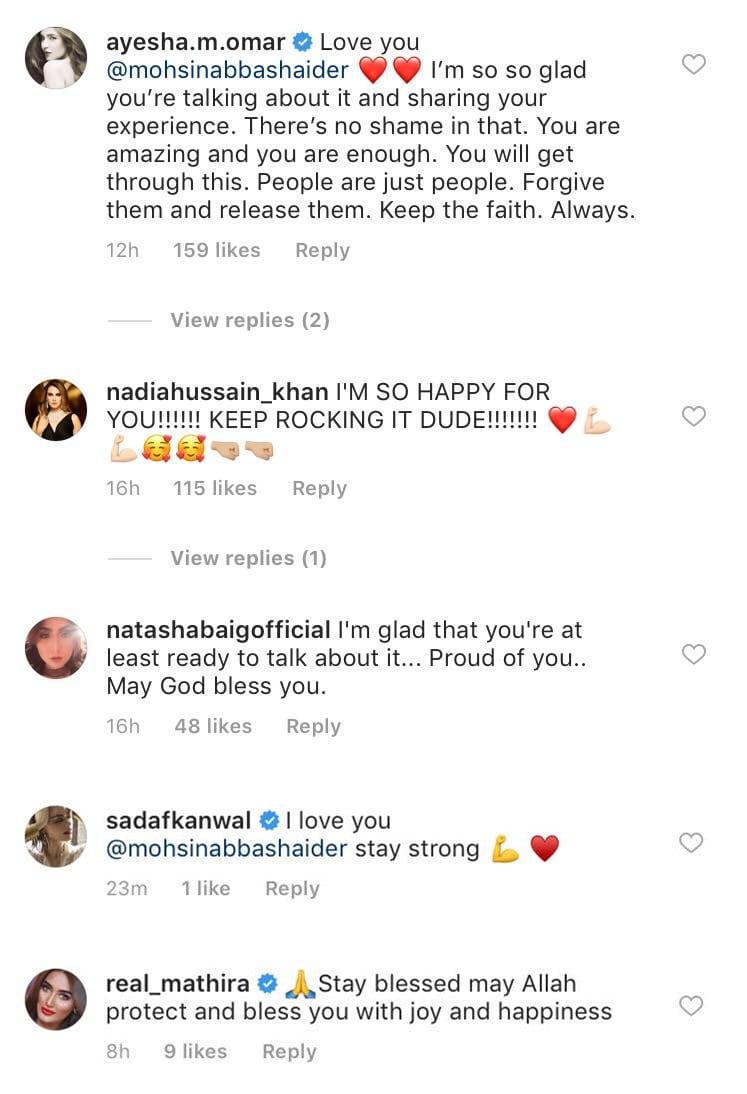 We are glad Mohsin opened up and we are certain that he will enthrall the Pakistani media industry with a plethora of his captivating performances. More power to you Mohsin!