One of the brutally amazing band, Strings, with its unmatched upbeat tunes, has reemerged with another astounding track. The legendary Anwar Maqsood’s son, Bilal Maqsood with his flamboyant instrumental skills and Faisal Kapadia, with his voice box of magic, has evolved the dimensions of music, Pakistan has ever known.

Strings is all revved up to celebrate its 30th anniversary this year with eight songs which will subsequently transform the way music is extrapolated in Pakistan in an album called, ‘Thirty’. Having been the first 30th-anniversary celebration song, ‘Sajni’ has crucified all the charts by being an absolute trendsetter. 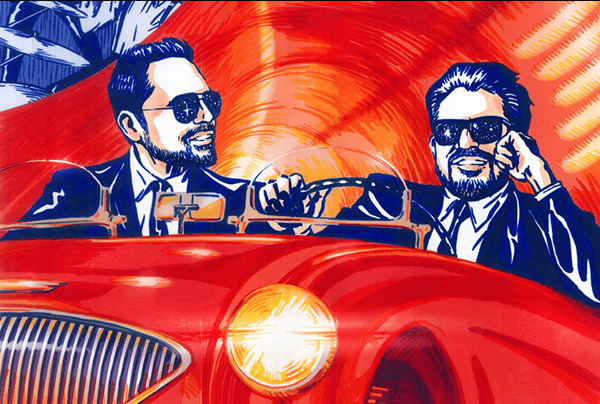 Written by the maestro, Anwar Maqsood, this song has all the constituents to become one of the most viewed/heard/celebrated song of recent days. ‘Sajni’ has the subtle crew of the Coke studio performing on keyboard, drums, and guitar. The power packed number happens to be more than five minutes in total and even a nanosecond does not go unacknowledged. The video shoot has been done indoors, at three locations specifically. A darker studio where the whole band is singing, a living room with contemporary furniture, adroit keyboard and a chic Marshall amplifier and another set in which the astounding duo was seen driving from somewhere with a red ambiance to the cosmos in a vintage car.

The melodious audio/visual treat starts off when Faisal Kapadia comes to Bilal Maqsood who appears to be a shrink. When Maqsood asks him to start telling him the problem, Kapadia closes his eyes. He visualizes that he is standing with his clan along with the musical equipment. Rather playfully, he starts singing the song with all other men joining in with total synchronization. The ravishing Faisal Kapadia’s voice with the aura of unreality along with Bilal Maqsood’s genius guitar skills has taken the music game to a whole new level.

‘Sajni’ got the nerves of all the spectators attracted to the video song throughout five minutes of its duration. We are absolutely excited for the remaining songs from ‘Thirty’.

What are your views about this new visual sensation? Tell us in the comments below.

Sadly, the latest episode of Ruswai aptly describes our…

Did Sameera give the interview in ‘Ruswai’?