We guess, he actually meant when he had said; “Mujhay Out Honay Se Nahi, Tuk-tuk Say Darr Lagta Hai.” in the Karachi King’s PSL 2018 anthem. The dashing and uber talented Shahid Afridi never fails to ooze excitement out of his fans when he’s in the war zone, surrounded by 11 men from the opposing team.

Karachi Kings, this season of PSL, has garnered quite a bit too much fan following due to obvious reasons, one of them being, the presence of legendary, Shahid Afridi in Karachi eleven. The president of Karachi Kings in his interview prior to the tournament had told ARY, “Team’s victory or defeat depends upon the environment in our dressing room.” We haven’t understood it back then, but we understand it now. The spectacular Karachi Kings, in a Rollercoaster-like game with Lahore Qalandars, has exhibited an Indo-Pak-level exciting game yesterday.

All hell broke loose when Shahid Afridi, on the very first ball, hit the ball so hard that it went directly to the stands. All the spectators who were glued to the game went ‘awww’ after the tremendous six when Afridi’s youngest daughter, the cutie, Asmara roared like a lion. 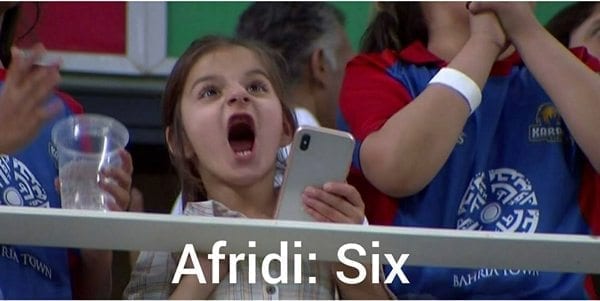 But soon after her dad’s shot got caught, the crowd went ‘hawww’ when baby Asmara got her jaw dropped in a worry.

This is not the first time when Afridi’s daughters exhibited love for their father, adorable scenes took attention of people watching the game by storm when Ajwa, his other daughter possessed extreme dismay while Afridi was a part of Peshawar Zalmi and he was on the pitch.

She was also witnessed chanting “Quetta will lose” in a game with Quetta Gladiator last season.

Although Karachi Kings grabbed victory in yesterday’s game, the cutest Asmara happened to be the ultimate winner of  hearts.

What are your views about yesterday’s match? Tell us in the comments below.