Asim Azhar wishes birthday to his father in an endearing way

From music videos to Coke Studio, to drama OSTs to songs in Pakistani movies, Asim Azhar’s journey is as magical as it gets. The 25-years-old songster puts his hundred percent in every song he intones, which can literally be felt when you hear one.

Asim Azhar has always proved to be a kind-hearted person by supporting abundant social causes for the welfare of humanity. Also, the amount of love and admiration he carries for his parents is exceptional. He misses no opportunity to embrace them.

Thursday, he took to Instagram to post a video of him singing with his father playing the keyboard in the backdrop. The Sinf e Aahan singer penned, “Happy Birthday to the main man. My abu jaan  What you guys see in me as an artist is not even 1% of what he is. What an honour to sing in front of this man playing. Love you abu aap jiye hazaaro saal, Aameen.”

Albeit being an extensively popular young songster, Asim Azhar is an owner of a happy-go-lucky and ebullient personification. Be it some random people or the stars from the Pakistani media fraternity, he is capable of bringing smiles to the faces of all the people he meets.

He had also bought his mother, veteran actress Gul e Rana, her dream car in 2020. 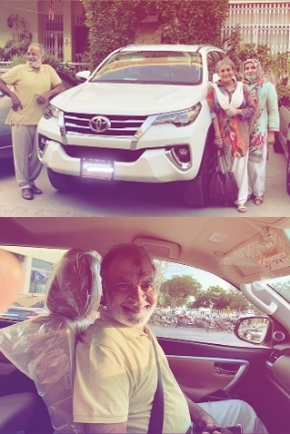 His stardom is not just confined to Pakistan, he is well-celebrated all around the globe, especially in countries like the US, UK, and a few Middle Eastern countries. Every year, he performs in variable concerts in Pakistan and at the top of it, he goes on a signing spree in different countries. The excitement and enthusiasm exhibited by the spectators in other countries are quite similar to that of his concerts in Pakistan.