With all her cute tweets and patriotic Instagram posts, philanthropist and social worker, Shaniera Akram happen to be the favorite national Bhabi Pakistan ever experienced. Having garnered utter love from her fans and from her husband’s, Akram never failed to earn the ‘Bhabi Goals’ status. She has been a true definition of a woman embracing the very land she is living in. Her immense love for Pakistan has left behind many of the celebs who claimed to be a patriot. She has been a true ambassador for the nation and the populace residing in this nation. From Instagram posts to tweets, there is no societal issue Akram didn’t raise her voice for. The diva has not only commingled with the Pakistani society, but she has also been seen praising and promoting everything made in Pakistan as well.

Shaniera Bhabi was seen having a fabulous time with another national Bhabi, Sania Mirza, a few days back during a Pakistan Super League (PSL) match in Dubai. She possessed a ‘V’ with her fingers depicting the two Bhabis. Both were seen enthralling the game with excitement and enthusiasm oozing out of them.

Recently, the UN Sustainable Development Solutions Network gave away a list of 156 happiest countries as of 2018. The list exhibited factors such as the absence of corruption, GDP per capita, social freedom, healthy life expectancy, social support, and generosity. According to the report, Pakistan happened to be the 75th happiest country. The list also included neighboring countries like India and Afghanistan but they appeared on 133 and 145 respectively. Moreover, Bangladesh, which was once the Eastern fragment of Pakistan got 115th place on the list.

Our bubbly Bhabi made a subtle comment on the list of happiest nations. She tweeted, “Pakistan ranked 75th happiest country in the world! Yeah yeah, we are.” Her husband and the ultimate ‘Swing Ka Sultan’, Wasim Akram replied to her tweet rather adorably by writing, “Well, If Multan qualifies then that might make a few more million people just that little bit happier! That might even take us up a few notches.” 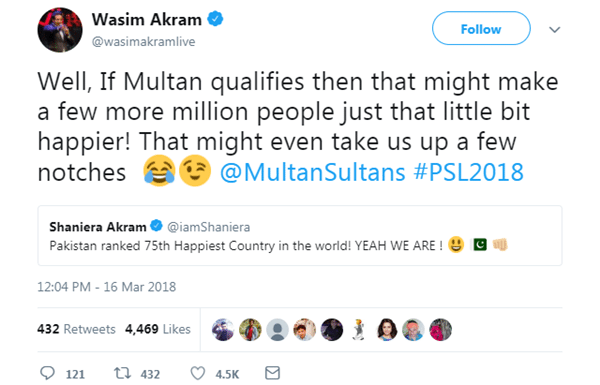 Such a cute couple! No?

Wasim Akram’s Multan Sultans has been trying hard to get into the next round but all struggle has put to rest with team’s dismissal from the third edition of PSL.

However, yet another time, our star Bhabi has come up with an admirable little gig that has made a vast populace love and respect her even more.

More power to you, Bhabi!

What are your comments and views about this story?